Top tips for running a successful business with Carrie Morey

Welcome to Episode 51 of The Executive Edge. This week’s guest is Carrie Morey, head of Carrie’s Hot Little Biscuit. 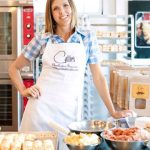 Carrie is a working mum of 3 girls and began her business with her mother Callie. Although Callie had a catering company at the time, it was Carrie who thought she could market and promote the biscuits. This was because there was no-one else doing this at the time.

It’s interesting that it’s one of the first recommendations I was ever given about business, to research a gap in the market. Carrie saw one in this opportunity. She has helped take the business to significant growth with 70 employees in 16 years since it began in 2005. Now she has a thriving brand with 4 outlets and a mobile food truck.

What are her secrets for success?

I think one of the notable things about Carrie is that she feels success is what you feel it is, not what it should be or what anyone else feels. For her, she wanted a business that would fit around her family, and this did it. She’s been able to be near her children and pick them up from school, effectively manage things whilst also feeling she’s been there for them. That matters to many of us when we’re working, want to achieve a lot as people but also become mothers.

Carrie has been through tough times and come through them. Conviction, strength, and drive have helped her as well as persistence and the ability to fail. She feels failure isn’t something that should stop you, or make you give up. If anything, she’s become more driven.

This way her children have seen her cope, both with running a business and being a mother, as well as juggling many things at once. It isn’t easy but she’s made it happen.