Welcome to episode 48 of The Executive Edge with Lou Everett, and Sherri McManus, husband and wife team from The Lou Everett Group. 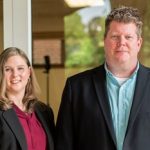 I asked them on the show because I was interested in Sherri’s experiences that lead her to leave the business she worked for and start work as a consultant and trainer. In my experience, this often happens because someone has an entrepreneurial idea and want to go it alone. But, in Lou and Sherri’s case, it was also because she found herself exhausted by mismanagement of the team she was in.

Lou worked for the company too in a leadership role.  Despite this apparent ability to influence things, he found it equally difficult to alter their work practices. The two of them decided to offer training, coaching, and speaking, to teach better ways to communicate and prevent a toxic culture.

What is a toxic culture?

This can be a number of things but principally happens when a business undervalues their employees. Examples of this include not allowing people to offer their thoughts and opinions, encouraging over-long work hours, and verbal bullying. This is when sickness absence can go up.  There can be a causal relationship between the volume of unhappy employees, and the way they’re being handled. A single employee going sick regularly isn’t the same thing. Sherri wasn’t alone in her experience within her team.

As Lou says in this interview, “it isn’t just the experience of the team at issue here, it’s how easy they found it to feel ‘heard’ or feed this back”. After a certain amount of time, all of us can get used to things.  So, despite feeling unhappy, we can come to believe this is ‘just the way it is’. Sherri and Lou both fight this. They identify other common errors.  Such as when leaders recognise there’s a problem but don’t assess the ‘real issue’ underneath. For example, they look at the surface issue, such as absenteeism, but don’t ask ‘why’.

Sherri returned to work with that business. She did so both to help the company handle the situation better, and to avoid absenteeism and unhappiness anywhere else in the company. It is testimony to both the business they worked with and Lou and Sherri, that both parties took up this opportunity.  I often find a company will reject that possibility instead. It’s cheaper, easier, or just more convenient not to ‘open the box’ further and look within for fear of what they’ll find.

What used to happen:

This used to be the biggest issue when I first started to work with business and talk about Stress. Many of them in the 1990’s and early 2000’s didn’t want to know for fear of opening the hornets’ nest, something that would be considered misguided now. The situation changed as the UK went in to a recession and it began to be respected and appreciated, that people matter.

Sherri and Lou ask the empowering question of leaders “are you really ready to hear what your employee’s think?” and this is very powerful. It ensures that a business is willing to invest in the relationship between what they are doing, and what people are feeling.

Lou and Sherri also offer a free downloadable action guide “Passion, Purpose, Why” to help you Find Your Passion! Find Your Purpose.