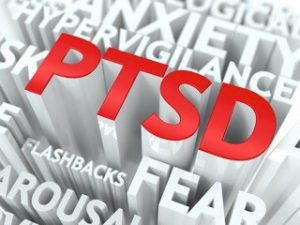 Post Traumatic Stress Disorder (PTSD) has been around for a long time. People know it under many different names. Previous terms for PTSD have included; ‘shell shock’ during WWI. Also, ‘war neurosis’ during WWII, and ‘combat stress reaction’ during the Vietnam War. In the 1980s Post Traumatic Stress Disorder (PTSD) became the term we use today. The first documented case of psychological distress was reported in 1900 BC. This was by an Egyptian physician who described a hysterical reaction to trauma.

PTSD is a serious illness. It’s characterized by symptoms of avoidance and nervous system arousal. This is after experiencing or witnessing a traumatic event. The illness causes you to re-live the event. That in turn, causes distress and difficulty in day-to-day life. The symptoms may become worse if you see, hear or smell something that reminds you of the trauma. It is often experienced by people who serve in combat military operations. PTSD is also seen in other types of trauma such as:-

What are the symptoms of PTSD?

Some of the symptoms are:

You can get symptoms of PTSD in the hours or days after a traumatic event. For many, these symptoms become less severe as they come to terms with what has happened. When these symptoms do not go away, there is a possibility you might have PTSD.

There are 5 main types of post-traumatic stress disorder:

This occurs because a healthy adult experiences a single traumatic event in adulthood. They then experience intense  memories. They feel emotionally numb, feelings of unreality, or feel cut off from relationships. This results in tension and distress. Such individuals usually achieve complete recovery within a few weeks.

Characterized by panic reaction, mental confusion, severe insomnia or feeling suspicious. They are unable to manage even basic self-care, to work, and engage in positive relationships. Few survivors of single traumas have this more severe reaction. Unless the trauma is death, destruction, or the loss of a home and community.

Involves persistent re-experiencing of the traumatic event. They also feel avoidance of stimuli associated with the trauma. This results in emotional numbing and symptoms of increased stress arousal.

This describes the feeling when someone experiences prolonged, traumatic circumstances. It is common during a traumatic childhood, such as childhood sexual abuse. It can also be diagnosed along with borderline or antisocial personality disorder. Individuals exhibit behavioural difficulties. These range from impulsivity and aggression to eating disorders, alcohol or drug abuse. Other reactions can include extreme emotional difficulties. This might be intense rage, depression, or panic.

As with all mental disorders, researchers are uncertain about the exact causes, but several theories abound: –

Hormones – It’s suggested that people who develop PTSD may have abnormal levels of the stress hormone, cortisol. This stress hormone strengthens memories of scary experiences. Cortisol influences how the brain is wired. It can deepen the stress associated with a traumatic memory.

Changes in the brain – The part of the brain called the amygdala handles how we learn about fear. There is some evidence that this structure is hyperactive in people with PTSD. The hippocampus which is another part of the brain, plays an important role in the formation of memory. There is some evidence that in people with PTSD, there is a change in this structure. It may account for some of the memory loss and other symptoms in PTSD.

Before having treatment for PTSD, a detailed assessment of your symptoms is undertaken. This is to check the best form of treatment for you.

In the UK, your GP will usually carry out an initial assessment. A mental health specialist completes a further assessment for treatment. This is particularly if you have had symptoms of PTSD for more than 4 weeks or your symptoms are severe.

If you worry you have PTSD, this quick screening quiz can help. It will determine if you might need professional input.

PTSD is treatable. This is usually with a combination of group and individual psychotherapy and medications. People with PTSD should seek out treatment with a mental health professional. For example, a psychologist or therapist. This person should have specific experience and background expertise in treating the disorder.

Most psychotherapy treatment for PTSD is ‘trauma therapy.’

Trauma therapy helps the person learn new skills to cope. The most common and effective types are exposure therapies. This might be trauma-focused cognitive behavioural therapy. (TF-CBT) for short. Eye movement desensitization and reprocessing (EMDR) is another. This is a well-recognised treatment now for PTSD.

Medications in conjunction with psychotherapy are useful. Whilst medications may treat some of the symptoms they may not stop the flashbacks. It may be difficult to relieve feelings associated with the original trauma too. For example, depression.

Medications for PTSD are often antidepressants. These are called Selective Serotonin Reuptake Inhibitors (SSRI’s for short). These are antidepressants such as, fluoxetine (Prozac), sertraline (Zoloft), and paroxetine (Paxil). The medicines tend to decrease anxiety, depression, and panic associated with PTSD. In some they help to reduce aggression, impulsivity, and suicidal thoughts. Various other medications are used to treat PTSD

In most cases, the symptoms associated with this condition decrease over time. Treatment is vital. Depending upon the severity of the symptoms, people can enjoy relief within a few months. Significant recovery may take a year or two.

The future for PTSD

PTSD can happen to anyone. It doesn’t discriminate. It impacts people of all ages, race, background and income levels. It can happen to soldiers or everyday people and it can come from a single, sudden trauma or a series of traumatic experiences. As with most illnesses, new treatments are being researched every day and the same is true for PTSD. Some of the newer, experimental treatments for PTSD include:

This may help treat the effects of trauma when combined with specialized counselling. Patients are not allowed to take a pill home. Instead, they must complete several weeks of counselling and then have a small dose of MDMA. This is while working with a specialized counselling team to discuss their trauma. MDMA encourages brief feelings of trust and comfort. This may allow the patient to discuss, re-process and heal from their trauma in a safe environment. The process lasts as long as eight hours and focusses on trauma recovery.

This therapy treats trauma in as few as five sessions. Many traditional trauma treatment methods may take months or even years to complete. ART is like a form of EMDR therapy. It uses calm, gentle eye movements to help individuals move past the trauma. A therapist using this approach tries to “replace the memories” and help the individual reduce their anxiety from their past experiences.

This uses technology to improve trauma memories and awareness. It is currently only available to war veterans and people with combat experience. This type of treatment was once costly. New technology has made virtual reality an affordable way to help soldiers now. They become more comfortable with battle memories. Healing occurs with the help of a treatment team, combined with virtual experience.

Cannabis may work by decreasing physical inflammation that can arise after chronic stress. This treatment is still under study and is not available to the general public.

Future work needs to review the efficacy of these newer treatments. Stringent research will give us a better understanding of what works. It will help us determine who responds best and under what circumstances. It may also increase accessibility and acceptability of treatment after live combat.

If you or someone you love, struggles with the effects of trauma, a list of useful contacts is here.

This is along with other useful resources such as: