Welcome to Episode 28 of my podcast ‘The Executive Edge’ with Jesus Eddie Campa. Eddie has a background in law enforcement where he spent 20+ years both in Deputy roles and as Chief of Police 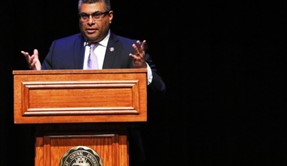 He later went on to start two businesses of his own, becoming a thought leader, speaker, and author on the topic of Leadership. Eddie’s success as a Chief of Police was to bring together disparate or minority factions where they were disillusioned, and life was tough. His value may have been obvious to the Politicians who placed him in power but Eddie’s capacity to see the bigger picture wasn’t always shared by those same people. It grew tougher to take the route he felt would make the greatest difference and eventually Eddie himself became disillusioned.

With hindsight, he thinks he was probably put in power because he would give minority groups a chance to see someone achieve something. Also, because he could act as a bridge between people. In reality, he felt like an experiment which although well meaning and progressive, didn’t hit the mark.

As he stepped back from law enforcement and in to running his own business, he began to see the difference. This is when you have the freedom and ability to make your own choices and see them through. He now talks about leadership as a public speaker and is regularly invited to speak at seminars about his experiences.

Recent events have been tricky too.

Recently Covid has been a difficult time for him to tackle, but he’s done so with his customary ability. He’s also built positive relationships with people. These have proved to be major clients who’ve come through for him when it mattered.

Doing the right thing for the right reasons has never worried Eddie. He’s done this because it comes naturally to him and because it pays off to be himself. This builds trust and enables him to sleep at night! We all must make unpopular decisions at times, but it’s important to recognise we will not be liked by everyone anyway.

Maybe those who are ‘movers and shakers’ in life don’t get liked for everything they do.  But, their ability to ‘see the bigger picture’ means they have made those choices for the right reasons.