Welcome to episode 44 of The Executive Edge with Karena Calhoun 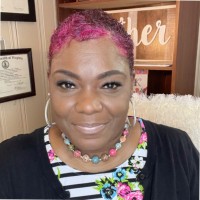 (www.warkry.com). Today Karena and I discuss positive mindset and why we struggle with being ourselves in life. Many of us find it difficult to do this. Some of the reason for that is because it’s difficult to learn to be ourselves. If that sounds profound, I think that’s because it probably is! Being young and still developing self esteem is a process, and often we become wired to please others instead.   Karena cited an example where she tried to persuade her daughter to go to college in the belief this would be good for her in the future. However, her daughter wanted to be an aesthetician and didn’t feel college, or corporate life, was for her.

So often we start out in a particular way because this is what we think we want. But, it’s important to realise that once we get older if we’re not happy, there’s a reason for that. Karena has found unhappiness manifests in her clients as not feeling the right ‘fit’ in a company or job. Or, she finds it’s about feeling de-energised, and deflated. We all need to recognise that there will be something we’re good at in life and the way to recognise that is because it doesn’t feel a struggle to do it!

This is really the key

If you’re a young person listening to this, or perhaps a parent with a young child, the issue is to let them learn what they’re good at. They can do this by volunteering, such as gardening for a neighbour or joining a community project. Perhaps they could try something for charity, join a team sport, or make something. All these things give us a chance to see where we excel. It may be that you’re not good at the actual task such as the gardening itself, but you can persuade people to keep going even when they’re tired or it’s raining. This skill can be important in life. So, it often isn’t the task at hand that we benefit from mastering, but using other, peripheral skills we don’t know we have. This is how my son discovered he’s a great team player. He went along to cheer teams in his school even when he wasn’t in the team himself. The teachers noticed this and praised him. He’s also good at getting along with people. This came from learning that he’s great at golf. He had to play with so many adults that he learnt how to talk to just about anyone! Karena recognises this herself. She is an introvert she feels, but needs to promote herself both by interviewing people and by being interviewed. Both these skills require being in the spotlight. This is something she could find difficult because she’s introverted. However, she’s learnt to use tools that help her. Among these are a way of ‘pre-fuelling’ as she calls it so that she can step up to the process of being interviewed