The Boy in 7 Billion

Welcome to episode 42 of The Executive Edge. This week’s guest is Callie Blackwell. 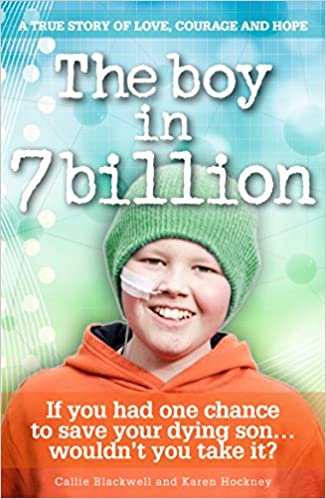 Callie came on to the programme to tell her story and that of her son. Several years ago, she experienced a very traumatic time due to her son’s extremely problematic health issues and cancer diagnosis. The complex needs he had and her own struggle to get him help, resulted in exhausting rounds of treatment. She had a lot to deal with to support his extremely problematic health issues.

It resulted in a significant decision whilst supporting her son through the final stages of his illness.  Deryn was put in to hospice care. At that point both of them began to lose hope. The bone marrow transplant he’d had and the range of treatments they were giving him, reached a pivotal tipping point. Deryn had got to the stage where he’d had enough, and Callie understood.  But, at a time when she felt she had nothing to lose, she made the decision to try Cannabis oil. This was a substance we don’t routinely use in this country, and it was difficult to find. But Callie is a woman who did her research, both about every stage of Deryn’s illness, his treatment, and about the oil itself.

She gave him some and found over the next few days that whilst it was never a cure for his cancer, it did calm him. This she feels, gave his body pain relief, and time to fight back. By some miracle Deryn began to get better and Callie campaigned for cannabis oil to be taken seriously as a medical solution to pain and anxiety. She’s been an advocate of it ever since and has written about her experiences in her book ‘The Boy in 7 Billion’ available from Amazon.

She has since partnered with a company to make her own versions of the oil with additives for both pain and anxiety/ depression. She’s achieving results and has many testimonials to support it.