The Fighter Pilot Mindset in Business with Christian ‘Boo’ Boucousis

Welcome to episode 41 of The Executive Edge. This week’s guest is Christian ‘Boo’ Boucousis.

Christian trained in the RAF and became a fighter pilot for a number of years. Some of them here in the UK. I asked him on to the podcast because I was as equally interested in his life as a pilot, as the subsequent decisions he made in business. Boo as he prefers to be called, (as this is his call sign), left his flying career due to an autoimmune condition. When he did so, he decided to set up a business in Kabul which became very successful, and he sold it. 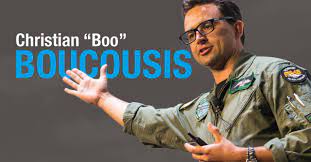 After that, he set up a second business in Australia building a skyscraper hotel using prefabricated materials.  This was another achievement that got him noticed as it was the fastest building of its type to be erected.

What did we discuss?

Boo believes there is much about his career that can benefit people in business. Namely, there are four principles he was taught that he recognises other people could use too. He calls one, having a mindset for success. Another principle is having a structure in place.  A third is having the skills to do the job well, and a fourth is time.

He believes people need to learn quickly from the errors they make, calibrating small changes as a result. He encourages people not to take feedback personally. If you can disengage your ego, that’s a good thing as pilots don’t have that luxury.

You can hear more from Christian in this episode and subscribe to our podcast on iTunes, Spotify, Google play and iHeart.