Imposter Syndrome – what it is and how to overcome it! 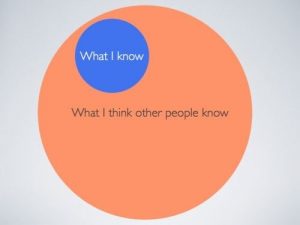 Are you an imposter?

Impostor syndrome is a psychological pattern in which an individual doubts their accomplishments. They have a persistent internalised fear of exposure as a “fraud.” Despite being competent, individuals convince themselves that they are frauds. They don’t feel deserving of anything they have achieved. They also often attribute their success to luck or good timing. They feel convinced other people believe they are better than they actually are.

Are we all imposters?

Early research from psychologists focused on high achieving women. They were the main sufferers, but the syndrome has impacts men and women in roughly equal numbers. It turns out, it can happen to the best of us. In a recent public post, Atlassian co-founder and co-CEO Mike Cannon-Brookes, opened up about his experience with Impostor Syndrome. Brookes heads up a global company with thousands of employees. He has millions of users but said, “Most days, I feel like I don’t really know what I’m doing.” You might look at a successful CEO and wonder how they can feel like that. It’s because Impostor Syndrome is not based on reality, but rather a person’s perception of reality. Impostor Syndrome can and does happen to anyone.

The problem with being an imposter

While for some, impostor syndrome can motivate them to achieve, this comes at a price. They experience constant anxiety. They can enter into a vicious cycle, over-compensating for fear of being ‘found out’. They over-prepare or work far harder than necessary to “make sure” that nobody finds out they are a fraud.

The problem with it is the experience of doing well at something doesn’t help. It does nothing to change their beliefs. The more they do, the more they feel a fraud. It must be the result of luck, it couldn’t be that their hard work justifies a great performance!

These feelings worsen causing stress, low self-confidence, shame and in some cases, depression. Often those suffering from impostor syndrome tend not to talk about how they are feeling. They suffer in silence, further exacerbating the problem. This may limit their courage to go after new opportunities or explore new areas of interest.

1. Own your achievements – Whenever you receive a compliment, accept it, say thank you and move on. Not everyone will be able to identify that you are dealing with impostor syndrome. They may feel you are ignoring their compliment even if it appears you are being modest. Accept that you worked hard enough to achieve what you have and be proud of yourself.

2. Avoid comparing yourself to other people – Social media makes it too easy to compare yourself. You are thinking about your income or self-image, “branding”, or life choices so you fuel this fear. Other people are more interested in their own fears!

“Forget those things that aren’t worth remembering” – Tim Foley

3. Keep a record of the nice things people say about you. This will help you through those periods of feeling down. Keep the cards you receive. These will help you to remember your achievements.

4. Realise that no one knows what they’re doing all the time – everyone is trying, failing and succeeding. And not in that order! Not everyone has a plan that is going to plan. The trick is to keep going anyway, try it, it may work. It may not, but if it doesn’t, try again or try something new!

“There are many ways of getting strong, sometimes talking is the best way” – Andre Agassi

5. Share your feelings – talk to other people about how you are feeling. These irrational beliefs tend to fester when they aren’t talked about.

6. Refuse to let it hold you back – no matter how much you feel like you don’t belong. Don’t let that stop you from pursuing your goals. Keep going and refuse to stop.

Remember that if you are feeling like an impostor, it means you must have some degree of success. Used to attributing to luck, you downplay it. It’s ok to modest but negative is another thing! Try instead to turn that feeling into one of gratitude. Look at what you have accomplished in your life and be grateful. Don’t let fear cripple you! Let your guard down and let others see you.

If you’ve done all these things and still feel like you’re an impostor, it is important to speak to a professional. This person can help you deal with the feelings associated with the syndrome.