How to maintain a positive mindset with David Trotter 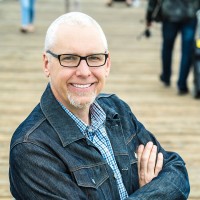 Welcome to episode 25 of my podcast, The Executive Edge with David Trotter. David is a Business Growth Consultant and has built several businesses as well as having been a Pastor for the last 10 years. Based in California and running three parts to his business, he tells us about them in this episode.

What does he say today?

Today he’s concentrating on telling us about why he helps women in business particularly. Whilst they are not the only group who need him, there’s no doubt that many of the women he’s coached have been particularly affected by his teaching and benefited from it. He believes that some women are caregivers and put themselves second.  Others can communicate using masculine energy which might not help them in all circumstances. He helps women learn the tools for greater success.

Once we looked at why women like his message, he responded that he recognises all of us get in a mess inside our heads at times. This happens because we come from a place of using our businesses to fulfil a need and its those needs that David feels we should tackle. Coming from a negative place can hold us back. No-one needs to feel less worthy in life he believes, but rather that we all tend to believe everything we think!

Why does this happen?

Our thinking gets in a mess and he described a simple, but effective, four stage process he teaches people. That’s because we all tell ourselves lies about who we are or what we want.

Lies may feel a strong word, but it really means limiting beliefs. That is, the risk that we invest a lot of energy in what comes in to our heads. Our filter may not get rid of the negative stuff but instead we almost trust that more!

David talks about how to replace it with a strong and positive belief instead, challenging the evidence that the new behaviour can be effective too.

If you would like to hear more from David, you can subscribe to our podcast on iTunes, Spotify, Google play and iHeart.